UI Toolkit at runtime: Get the breakdown

UI Toolkit is a collection of features, resources, and tools made for developing user interfaces and Editor extensions. First introduced as UI Elements, UI Toolkit offers a retained-mode UI framework to facilitate the development of custom UI for Unity Editor extensions.

Available in the latest version of Unity, UI Toolkit supports the creation of runtime UI through a familiar and intuitive authoring experience, inspired by web technologies. This article examines the specificity of its capabilities and shares tips for getting started with UI Toolkit at runtime as an alternative to UGUI.

Check out this manual for an in-depth comparison between UI systems.

Getting started in Unity

Unity 2021 LTS is now available to download and use. This release represents more than a year of focused development across the entire Unity Editor plus underlying foundational features, combined with the features included in our Unity 2021.1 and Unity 2021.2 Tech Stream releases (with an additional six months of quality polish).

To get started, download the latest version of Unity from the Unity Hub.

Creating UI in collaboration with artists can be a complex task. While the artist is editing the Canvas to add colors and material, the developer adds scripts, behaviors, and OnClick listeners. Afterward, when merging occurs, merge conflicts can arise and lead to issues that require swift resolution.

UI Toolkit prevents such merge conflicts by having the artist work on the UXML and USS files while C# handles all of the logic. For example, button handling is done with C# only, which queries the button using its name, and adds logic without editing any UXML or USS files.

Not only does this process ease merging, it simplifies future style changes. For instance, if all project fonts suddenly had to be changed, you wouldn’t need to go through each asset, one by one, to edit the text settings. This avoids tedious work that can lead to oversight issues – and the bigger the game, the more complicated this becomes.

With UI Toolkit, Panel Settings hold all of the text settings. So to change the fonts under a UI Document, you only need to edit those Panel Settings. Although Editor scripts can similarly assist with UGUI, UI Toolkit’s framework automatically handles this process.

A Visual Element is the base class of every UI Toolkit element: buttons, images, text, etc. You can think of it as the GameObject of UI Toolkit. Meanwhile, UI Builder (Window > UI Toolkit > UI Builder) is a visual tool that helps create and edit interfaces without writing code. This is useful for artists and designers alike, as it allows them to visualize the UI as it’s being built.

As the premiere tool for people already familiar with web technologies, UI Toolkit also improves collaboration between artists and developers by separating logic and style to refine organization and avoid file conflicts. While UI Builder takes care of the elements’ positions, style, and design, code can be handled in a distinct section of the project to query the parts of UXML that it needs, and connect logic to it.

Getting started with UXML

UXML files are comparable to HTML web files. They represent visual elements and contain the hierarchy of the UI. Create a UXML document via Assets > Create > UI Toolkit > UI Document. Then use UI Builder to visualize and work on the newly created UXML. 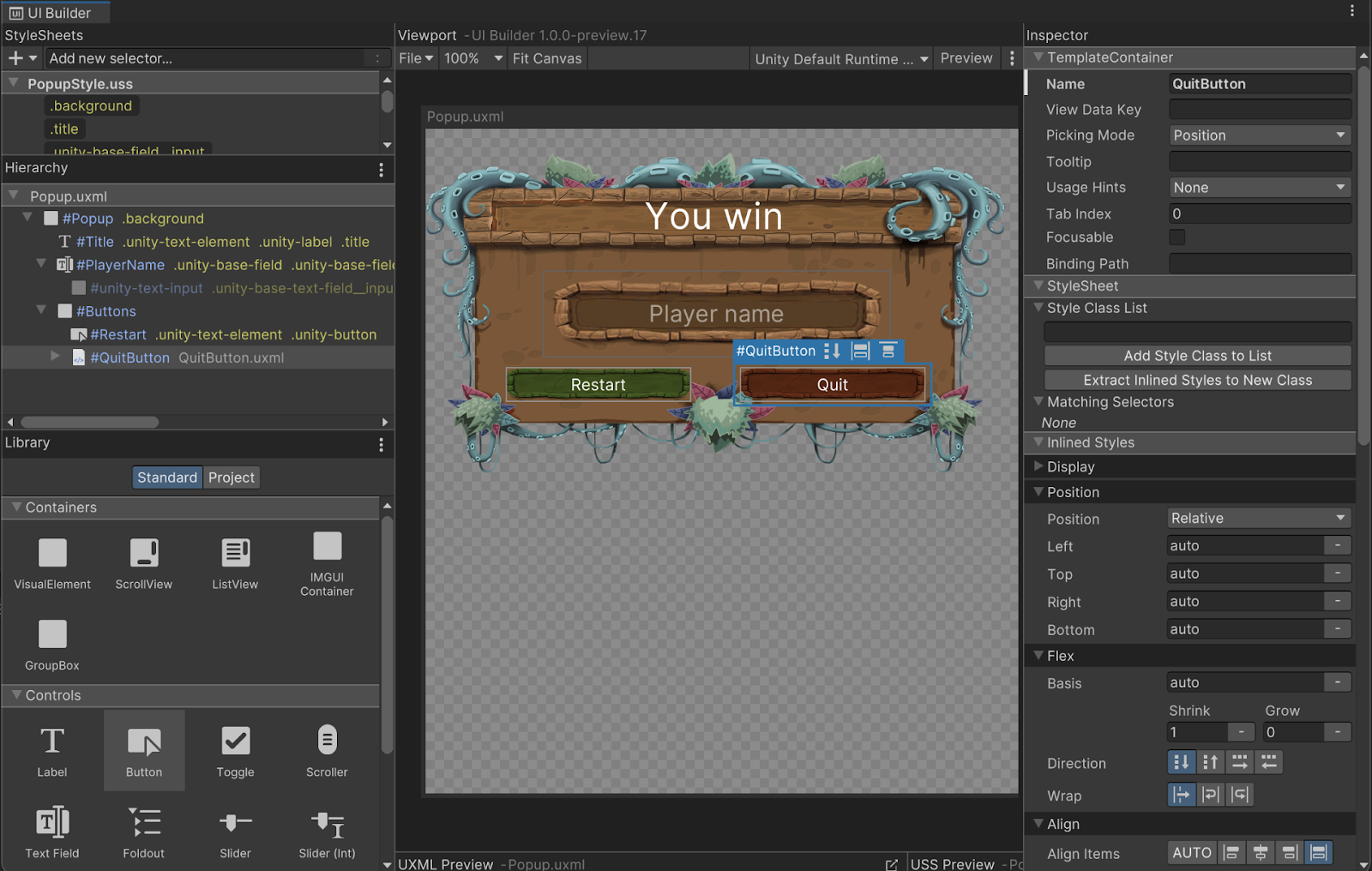 Note, however, that a UXML file should not be treated as a GameObject, but rather as a tree of visual elements. To lighten up the hierarchy, harness a single UI Document and load all UXML elements on it. You can visualize the UI with UI Toolkit Debugger under Windows > UI Toolkit > Debugger. 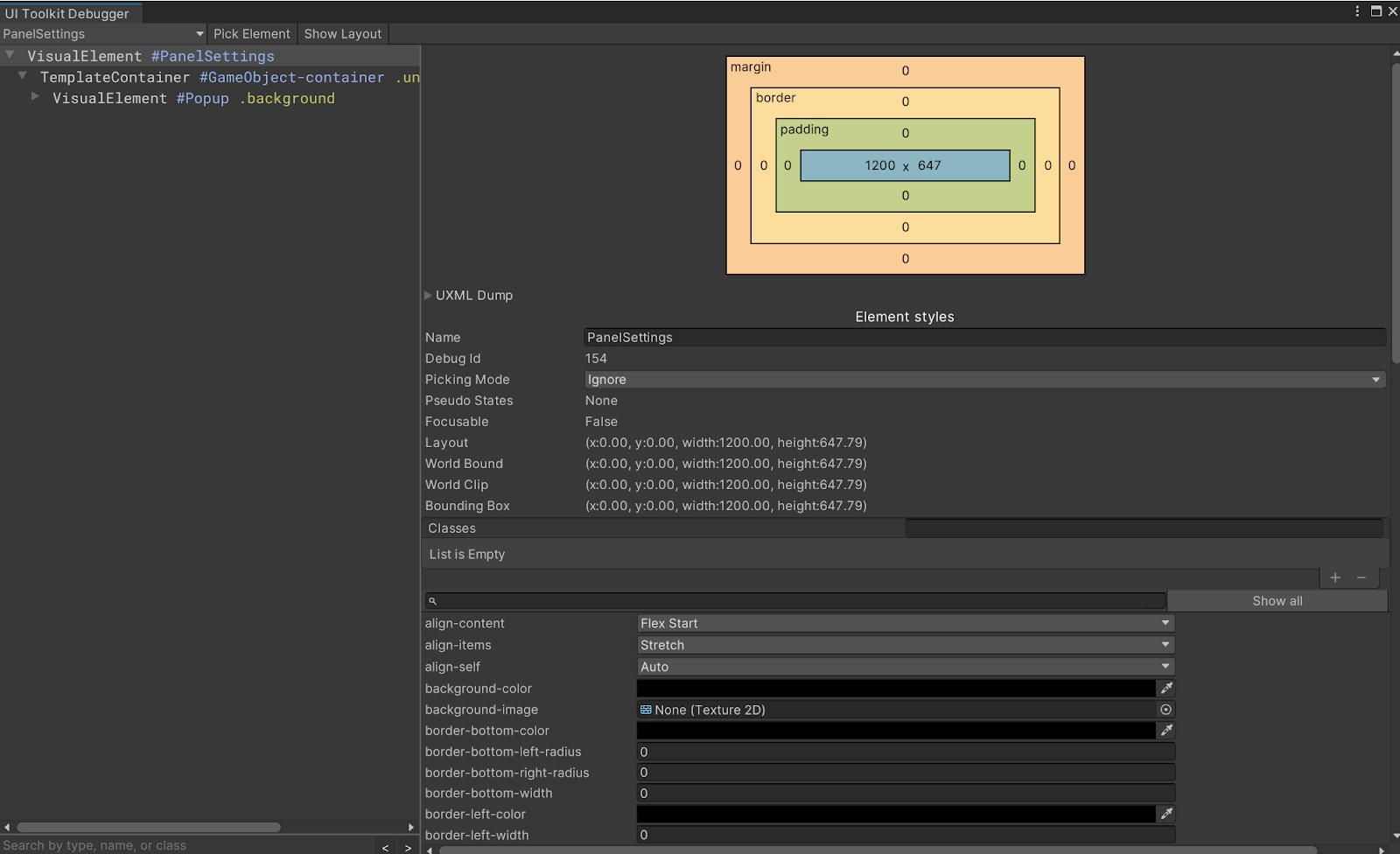 To help you get started, take a look at some UXML Element examples from Windows > UI Toolkit > Samples.

Thanks to UI Builder, UXML files can be created, visualized, and tested without launching the game. Just drag and drop UI controls (standard or user-made) into the hierarchy from the UI Builder Library panel, and combine multiple UXML files to create the final UI.

Let’s say we have a UI composed of three elements:

The “You win” pop-up will display Health, Score, as well as a Restart button.

Each element is used in a different UI panel of the game, as they are part of separate UXML files with popup.uxml – a combination of health.uxml and score.uxml plus the Restart button. As such, the code logic managing the score and the health (score.cs and health.cs) are independent of the hierarchy. This means that health.cs will always update health.uxml values, whether the UI is displayed alone onscreen or inside another pop-up.

Combining UXML can also facilitate the visualization of edited objects. By turning on the Class List option within the UI Builder hierarchy, you can see what is impacting the object at first glance, and use selectors to keep the style organized:

Another benefit concerns the Scene hierarchy. Instead of having a single Canvas with dozens of GameObjects, UI Toolkit only needs one UXML file linked to a UI Document. 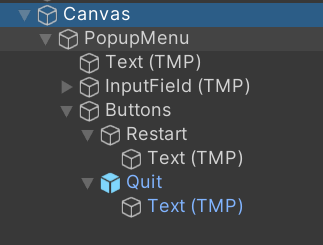 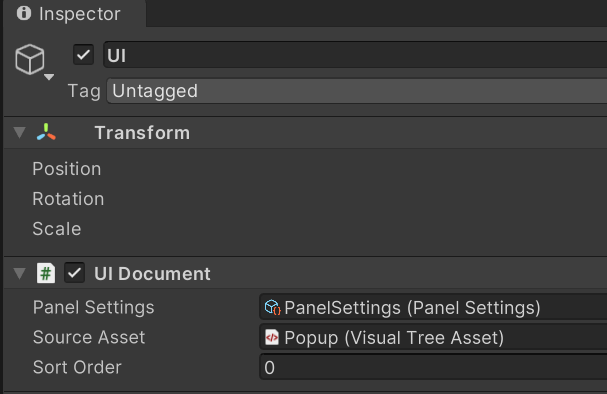 This workflow is particularly advantageous for larger teams. Instead of working on the same scene, with the possible risk of merge issues, each team member can work on their own UXML files, which are then added to a single UI Document within the scene.

Panel Settings can be seen as a UGUI Canvas + Canvas Scaler with additional options like text settings, so that all text inside the panel uses the same base setting. This avoids time spent manually resetting each font – but of course, fonts can still be overridden inside the individual UI Documents, as needed. 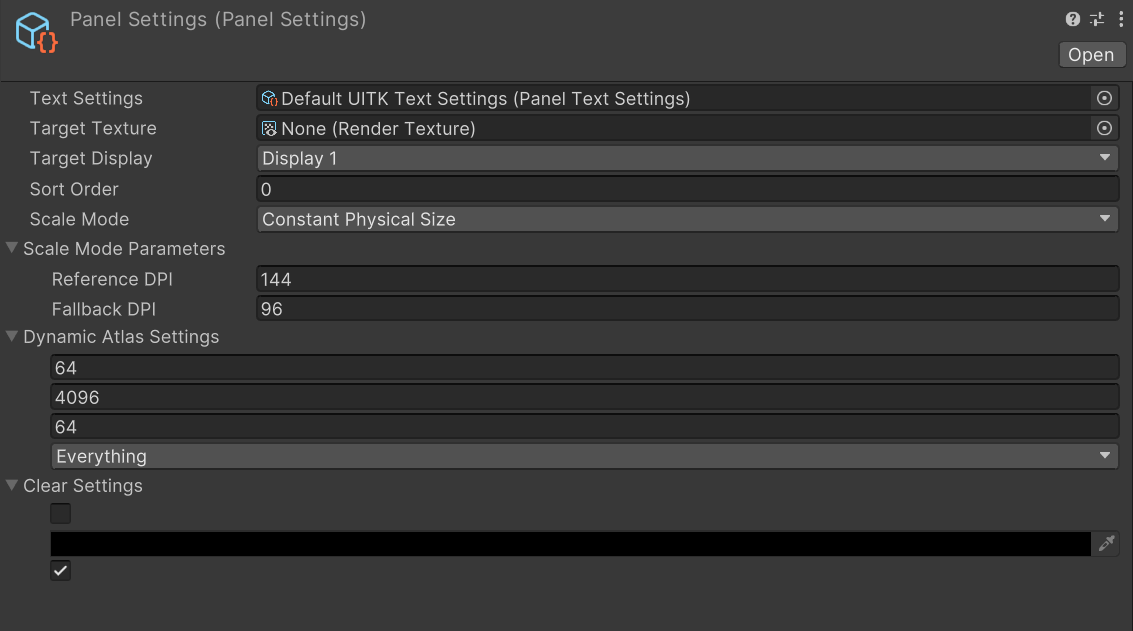 UI Builder is not meant for event management, nor is the UXML document. To handle a button-click or any other event, create a C# Script and link it to the UXML. 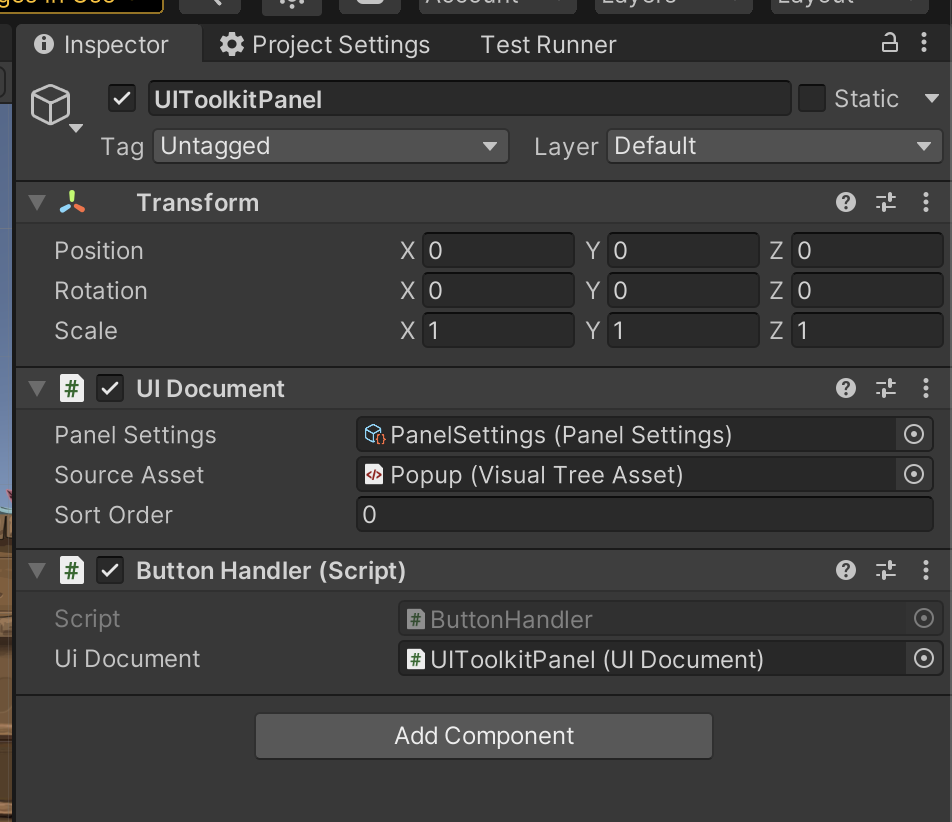 Element positioning uses the Flexbox architecture by default. This ensures that most layouts are responsive to container or screen size. Apply it to a Visual Element Tree with two or more elements, then define how they align on the tree.

Placing an element in Absolute positioning means that it will be situated relative to its parents’ positioning, and won’t affect or be affected by any other positions.

For the Flex and Align settings, use this simple hierarchy as an example: 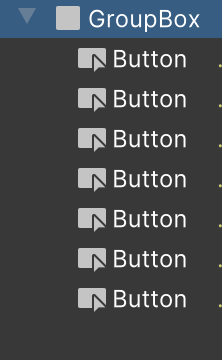 Edit the the following settings using the UI Builder Inspector: 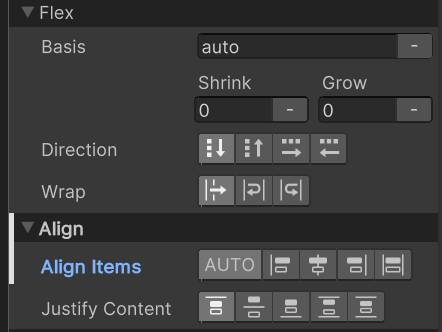 Styling is where UI Toolkit exhibits its full power. Adding Style to visual elements is done via USS files (Assets > Create > UI Toolkit > StyleSheet). They are the Unity equivalent to web CSS files, and use the same rule-based format.

Note that user-made USS files are not mandatory for the UI to work. Runtime and Editor Styles are provided by default, but creating custom USS enables you to expand on what’s already provided or even create styling from scratch.

You can add Style selectors through the UI Builder Inspector StyleSheet panel and then edit them using code or UI Builder. 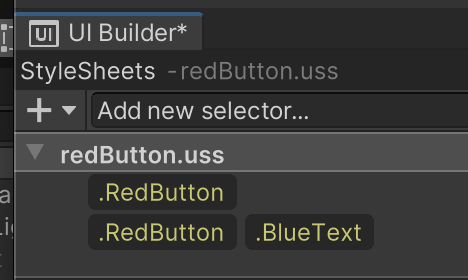 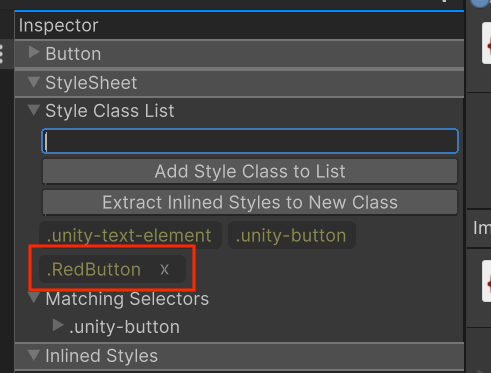 Matching added Class on the Inspector

In the above screenshot, the .RedButton selector is added to a button. The selector thus appears alongside the built-in .unity-text-element and .unity-button classes that all buttons automatically have.

Below is an example of a USS rule that sets the background color of all elements with the .RedButton Class to red. The first line of the rule is a selector using Class name followed by a list of Styles to apply.

Just like in CSS, classes can be combined to further restrict the scope of a rule’s selector:

In this example, only objects with both the .RedButton and .BlueText classes will have blue text. When combined with the previous snippet, the button will also have a red background.

Like CSS Styles, USS files can be used to override the appearance of objects based on their state:

In this example, all buttons that are in the hover state will have their background switched to red. To preview hover styling and see what the effects look like, click Preview in the UI Builder toolbar.

Now that we know the basics of UI Toolkit, let’s build an example that compares creating interfaces using UGUI vs UI Toolkit. Our goal is to build a simple menu, including mouse hover with the following two effects: 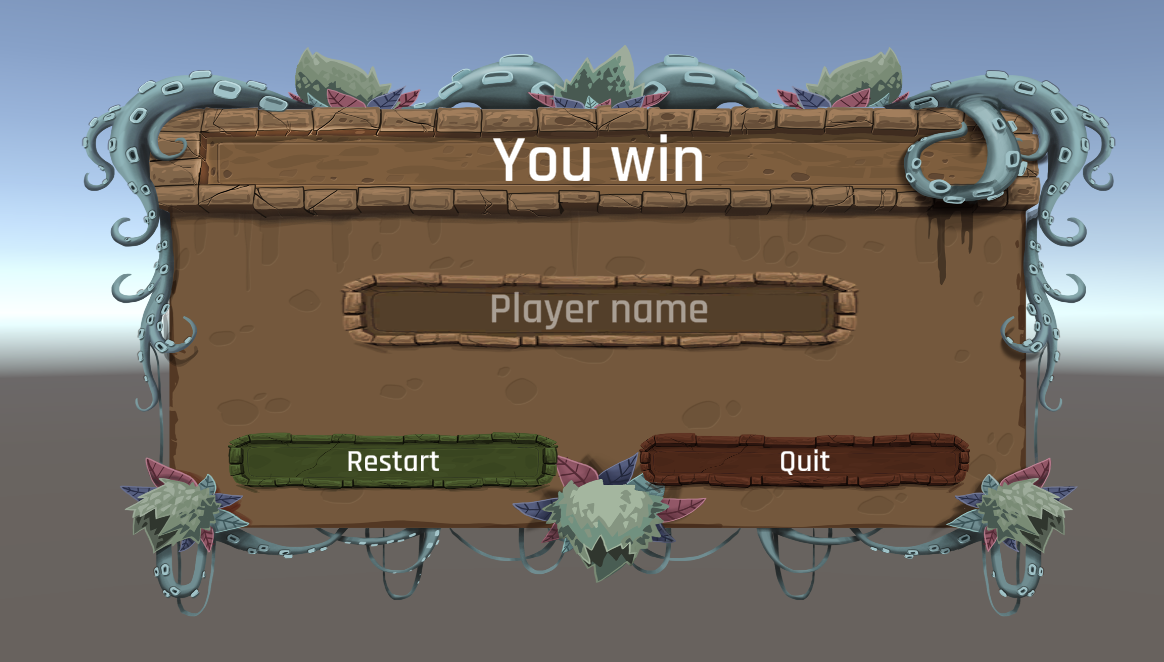 To create this menu with UGUI, set up the following hierarchy: 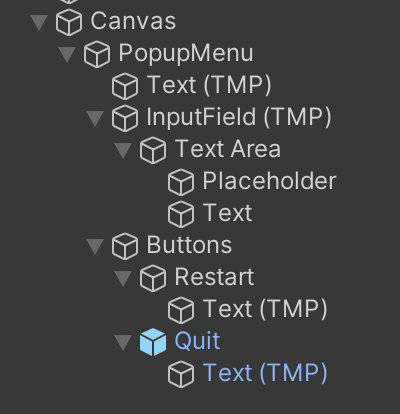 We also need to add a few extra components to some objects:

In this example, Quit is a Prefab defining a red button.

Now, to create the menu with UI Builder, start with a similar hierarchy: 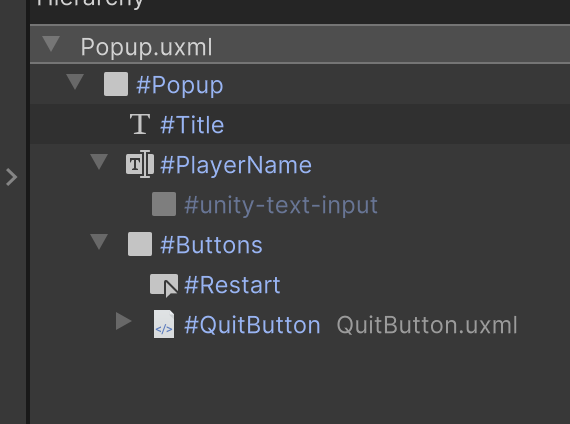 With Popup Align set as Center, and Buttons Flex Direction set as Row, our current UI Toolkit pop-up looks like this: 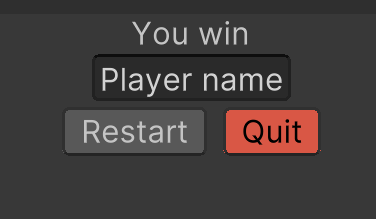 To see where the UI Toolkit magic truly happens, add a PopupStyle.uss with a bunch of rules and… 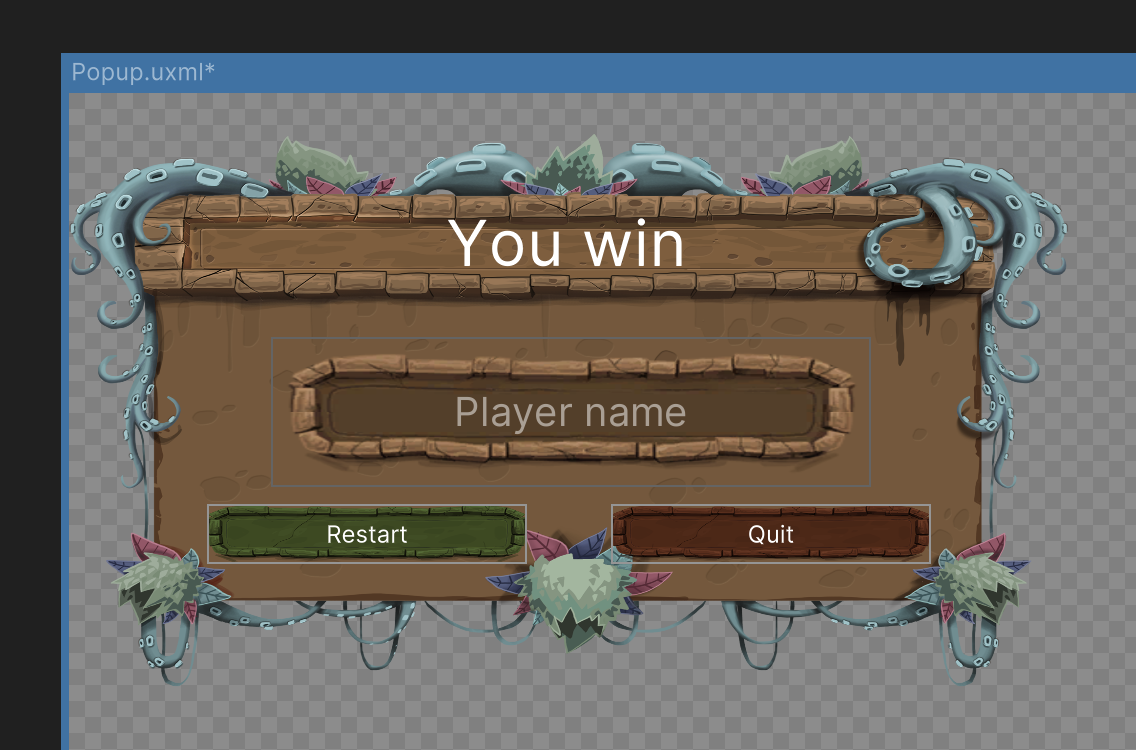 Please note that there’s selector precedence in place here. For example, a style written directly into the UXML will override the one in the USS files. Here, the width and height of the elements are added to PopupStyle.uss, but they could also be edited directly in UI Builder, and override the PopupStyle.uss. The precedence rules can be found here.

So let’s say we want to change all the colors that appear in the menu, but not in the rest of the game: UGUI would require us to manually edit all of the colors for all components, one at a time. Consider our example, however. While only the Quit button is a Prefab, we could make them all Prefabs, so to override them once locally. Then, as they are edited, any future color change in the Prefab would be ignored by the menu.

Adding UI to the scene

Once the UXML file is created and styled, the last step is to add it to the actual scene. To do this, replace the Scene Canvas element and create an empty GameObject with a UI Document element. Fill it with the popup.uxml and Panel Settings files, and press play to test the new UI.

Once you’ve had a chance to try UI Toolkit, please let us know what you think on the UI forums, or check out the official documentation for further details.

Finally, you can follow the latest updates by visiting our new Unity Platform Roadmap. Please share your feedback directly with the product team – we look forward to hearing from you!

ByMarina Joffrineau
April 20, 2022 in Technology | 20 min. read
Topics covered
User interfaceLong Term Support (LTS)Product news
What is a legacy comment?Read about our new commenting system here
Partners
"Unity", Unity logos, and other Unity trademarks are trademarks or registered trademarks of Unity Technologies or its affiliates in the U.S. and elsewhere (more info here). Other names or brands are trademarks of their respective owners.