When we port Unity to new platforms, it is always an important question to find out how well it performs on that platform - and to see what we can do to make it perform as fast as possible.

One exciting new platform we are currently working to support is WebGL. WebGL is unique when it comes to performance: all code needs to be cross-compiled to JavaScript; some common performance-enhancing techniques, like multi-threading and SIMD, are not available yet; and we are relying on a completely new scripting runtime, IL2Cpp, to run user script code. So we need to find out: Will it be fast enough to play games? How will different browsers and hardware compare? What build settings will produce the fastest results?

These are the questions we have asked ourselves, and we have frequently been asked by our users as well as by suppliers of WebGL implementations. The most obvious approach is to run existing Unity content in WebGL and measure the frame rates. We found that, for most of the content we’ve tried, frame rates are at least 50% of native builds (depending on many factors, such as the browser being used). You can try two demos of games exported to WebGL here. However, we would like to get precise and reliable numbers. Which areas are particularly slow in WebGL? Which are fast? How do different implementations compare, exactly?

To find out, we have created Unity Benchmarks, a suite of benchmark tests written in Unity. The benchmarks stress different areas of the engine and produce easily-comparable numbers on performance. Click here to try Unity Benchmarks in WebGL in your browser! (Note that some WebGL implementations on windows may get incorrectly high results for the Mandelbrot GPU benchmark, as they won't render the shader correctly. We are investigating the issue and looking for a fix.)

Unity Benchmarks has different tests stressing 3D physics, 2D physics, particles, navigation, animation & skinning, object instantiation, scripting, draw calls and GPU pixel throughput. Each benchmark will count how many iterations of a given task Unity can perform in a fixed amount of time. For the reported numbers, higher is always better.

If you run all of the benchmarks, it will also show an Overall Score value. This score is calculated as a weighted sum of all the individual test results. Since the different benchmarks have very different result scales, they each carry different weights in the overall score.  The weights are calibrated to produce similar result scales on my development machine running in WebGL. But that is somewhat arbitrary, so, when comparing results, the individual scores are much more meaningful than the Overall Score! 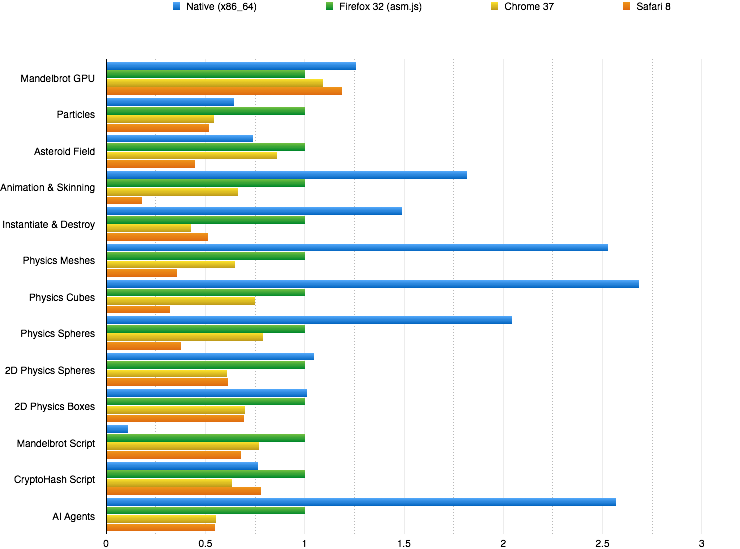 The scores have been scaled so that Firefox = 1.0, to fit onto a single chart. Higher is better.

The most important takeaway is, while there are still areas where WebGL is significantly slower than native code, overall you can get expect very decent performance already, and this can only get better in the future. I hope that these benchmarks may help anyone looking to optimize performance of their JS engines and WebGL implementations to run Unity content as fast as possible.

ByJonas Echterhoff
October 7, 2014 in Technology | 4 min. read
Topics covered
WebGL
What is a legacy comment?Read about our new commenting system here
Partners
"Unity", Unity logos, and other Unity trademarks are trademarks or registered trademarks of Unity Technologies or its affiliates in the U.S. and elsewhere (more info here). Other names or brands are trademarks of their respective owners.